Ghanshyam Shah is an independent researcher, based in Ahmedabad. He is a retired professor of Jawaharlal Nehru University (JNU), New Delhi. He was earlier a Fellow in Resident, the Netherlands Institute for Advanced Study, in Humanities and Social Sciences, Wassenaar; and National Fellow, Indian Institute of Advanced Study, Shimla, and Indian Council of Social Science Research, New Delhi. He was also Director, Centre for Social Studies, Surat, and Dr Ambedkar Chair Professor (1995–1996) at LBS National Academy of Administration, Mussoorie. He was a Visiting Professor at the University of Chicago, Illinois; Banaras Hindu University, Varanasi; M.S. University of Baroda, Vadodara; and S.G. University, Surat.

He has authored/co-authored and edited more than 20 books, including Social Movements in India (1981 and 2004), Protest Movements in Two Indian States (1977), Public Health and Urban Development: The Study of Surat Plague (1997), Untouchability in Rural India (2006), Dalit Identity and Politics (2001), Re-reading Hind Swaraj: Modernity and Subalterns (2012) and Growth or Development: Which Way Is Gujarat Going? (2014). He is a recipient of several academic awards. 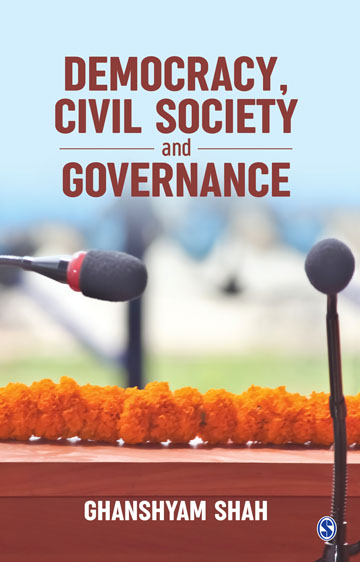 Democracy is both an end as well as a means for social transformation towards building egalitarian social order. The Indian constitution directs the State to carry out that mission by formulating policy and governance. Since the early ‘sixties, however, the idea of an egalitarian society has ceased to be on the political agenda of the State. All political parties have been engaged in all kinds of compromise to gain power. Except for Left, they have followed neo-liberal economy ironically as an end of ideology, a fait accompli for India’s destiny. Over and above, Narendra Modi’s BJP government in 2014 is welded with cultural nationalism albeit ‘Hindu Rastra’, undermining India’s plural culture embedded in different religious traditions and secular ethos in everyday life.

In this situation, civil society has a crucial role in asserting pressure on the one hand on the state for formulating policy and modus operandi of governance; and on the other articulating public opinion to translate constitutional principles of equality, liberty and secularism in practice. It is expected of civil society to function as a watchdog on the state whenever constitutional principles are violated. Besides public discourse, secular civic associations and social movements are its components.

The present book is an endeavour to critically examine the role of civil society in social transformation in India. At empirical level, civil society is not a unified entity.  The unequal strength and position of various socio-economic strata and elite with divergent perspectives in culturally plural and socio-economically stratified society reflect in the nature and composition of civil society. The composition of its segments changes from time to time and issue to issue. Their areas of activities, organisational structure and political perspective differ. For brevity, we classify these segments into a broad two categories: Hegemonic  (HCS) and Radical (RCS). The former is the largest in size, legitimises the existing political economy and social system that breeds and perpetuates inequality and strengthen the influence of dominant classes/castes. It functions as an ideological and cultural apparatus of the state and dominant castes/classes. The RCS, on the other hand, questions and challenges the present neo-liberal political economy, hierarchical and particularistic values and norms reinforcing inequality. It often confronts the state and dominant classes/castes and strives for changing the existing power structure. The boundary between these two segments is fluid, frequently negotiating on different issues. Both the segments of civil society irrespective of their position on neoliberal political economy stand for the democratic system and raise voice. The HCS is more concerned with formal democracy whereas the RCS stands for a substantial democratic system.

The modern civil society in India is the legacy of the western education system and governance. The first generation of western educated elite adhering to their lifeworld initiated public discourse on rationality, the relationship between society and man, science and religion, state and citizenship etc. They formed public associations for discourse related to the common good and also undertook activities for spreading formal education, ‘modern’ values and reforming social customs and structure. The space of modern civil Society then was primarily occupied by the upper strata of society. Its scale gradually enlarged with the expansion of higher education coupled with urban industrial centres. The freedom movement accelerated the process with an entry of a small section of peasant castes. It grew at a faster rate with growth in economy and education in the post-Independence India. The expansion, however, has so far remained largely horizontal than vertical in terms of the social composition of upper and middle castes. Over six decades, few activists and organisations belonging to traditionally deprived communities have entered civil society, particularly its RCS segment. Women activists and their organisations for gender equality also have a visible presence.

On the whole, civil society reproduces hegemony and way of life of dominant upper castes. The hegemonic values, however, are not monolithic and one dimensional. During the freedom movement values of dominant strata castes embedded with the hierarchical caste system were reiterated.  There is a more element of compassion than empathy and comradeship in their work among the have-nots. At the same time, the forces of modernity, and the capitalist political economy invoke competition, profit, achievement and rationality which too work in favour of the hegemonic classes. Conflicting nature of social hierarchical and modern market values coexists with tension and generates their new dynamic. The formal and informal education system, public discourse, media as well as the interpersonal relationship in public spheres reinforce hegemonic values. The subaltern communities with their own experiences and aspirations often contest hierarchical norms.  They strive for equality and dignity. A large segment of the RCS activists is not free from these hegemonic values because of their social orientation of being from upper strata. At the same time, they get perturbed when the state and dominant castes violate or ignore adherence to the core democratic components. The activists and organisations of RCS protest and even confront the state. They continue to do so, though numerically not strong. They are under state surveillance and subject to harassment.

With the financial support from international organizations and corporate houses, a large number of NGOs posturing as apolitical are engaged for ‘development’ work and for good governance. For them, professional expertise and participation of stakeholders with accountability and transparency in governance is the royal path for development. They work at different levels and segments, including infrastructure, credit, sanitation, health, education, etc. The parameters of ‘good governance’ have been actualized in a few cases where the stakeholders are from the rich and middle class. Participation of poor stakeholders and accountability of the government have remained on paper.

These NGOs do assist the poor to add some income and to sustain life so that cheap labour remains available to the propertied classes. Not only that, they make the poor feel guilty if they are unable to develop their skills and capacity to meet the needs of the market. Large segments of the pro-poor civil society engaged in welfare programmes depoliticize and socialize the exploited have-nots to the market, despite their dislike of capitalism. They inadvertently promote a capitalist culture and legitimize the neoliberal economic system. On the other hand, some organizations with a rights-based perspective use these programmes to develop consciousness among the poor for their rights as citizens. They develop local leadership among the deprived communities who develop the confidence to negotiate with political leaders and bureaucrats for their rights. These grassroots activists encourage and lead collective actions of local residents and in some instances have successfully obtained few basic services. Such success stories boost the morale of the poor for collective actions to get amenities without raising questions to the exploitative political economy.

Grassroots struggles of the oppressed people resisting and confronting the state and the dominant classes for their rights to protect natural resources, land, wages, etc., and also against atrocities and injustice, are innumerable. RCS actively support these struggles. Over a period of time, these struggles have acquired visibility in media and public discourse. Their gains are often localised, mostly remained on paper and illusionary providing hope that they would bend the system in their favour.  The forms and nature of these struggles vary. They are isolated, often around issues rather than the system. They are missing a larger political perspective related to the political economy. Their strength to sustain these struggles is so far limited.

RCS activists are relatively well articulated than HCS on public issues. They are actively engaged in raising their voice on the issues related to violation of public morality, injustice to poor, freedom of expression, etc., by the state and dominant strata. Though the presence of RCS organizations is quite visible and the state is occasionally compelled to take cognizance of their demands, their capacity of mass mobilization so far is limited. In terms of space, RCS is on the periphery of civil society. But with unfolding contradictions of the neoliberal economy, the circumference of RCS organizations in civil society is expanding.

Different segments of RCS have different ideological positions on the nature of power relations in society, the character of State and political class, political economy in general and neoliberal economy in particular. Their premise on Indian culture and tradition and their strategies for transformation vary. But, they often work in alliance with each other on most of the issues related to deprivation, violation of human rights, shrinking democratic space, etc. All of them increasingly realize the limitations of their ideological framework in comprehending changing social realities. But either because of their constant engagement in the field and/or because of their lack of aptitude and/or arrogance about their ideology, many of them are not inclined to engage in reflective analysis of their own experiences and to unlearn their pet theories. This is a major stumbling block to meet the increasing challenges of rising sectarian forces and the neoliberal political economy widening inequality.