On The Negro River by José Truda Palazzo, Jr.

José Truda Palazzo Jr is an environmental activist, writer and explorer who has dedicated himself to the environmental cause continuously for almost forty years. In the 1970´s, when Brazil was still under a military dictatorship, he became one of Brazil’s leading voices against Japanese whaling in its waters and led a research and conservation project which ensured the recovery of a breeding population of Southern Right Whales in Southern Brazil. Currently he serves as member of the International Committee on Marine Mammals and Protected Areas and in the IUCN Marine Mammals and Protected Areas Task Force and Tourism and Protected Areas Specialists Group. He is also an elected Life Member of the Australian Conservation Foundation and continuously participates in international campaigning for conservation initiatives in Australia, especially related to the marine environment and cofounded Divers for Sharks, now a 160,000+ strong international campaign working to halt the global decline of shark populations and restrict international trade in shark fins. He is a keen diver with dives logged around the world but especially in his beloved Yap, Micronesia where he acts as Global Ambassador in promoting Yap’s unique natural and cultural heritage. Twitter at @AustralNature and @brasildeovelhas, Facebook at https://www.facebook.com/jtrudapalazzo, and www.josetruda.wordpress.com

On the Negro River is an excerpt from Tales from the River, published Stormbird Press, 2018 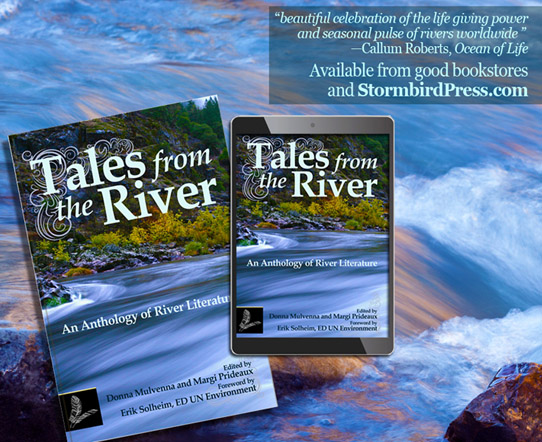 I came to see the flood.

Once a year, following patterns established in the deep past before humankind disrupted the climate, an immense stretch of the Amazonian rainforest becomes literally a water garden. Beneath a show of lightning and thunder, the rain that falls continuously for weeks transforms thousands of rivers, streams, lakes and wetlands into a single aquatic realm.

As many Brazilians, I had never visited Amazonia. Looking at its location on a map, you don´t realize the distances to get to any of its main entry cities are truly gigantic, and those of us living south of the great forest pay a higher airfare to get there than to the Caribbean or Miami. But when close friends from the other side of the world—the Island of Yap in Micronesia—invited us on a two week private expedition from Manaus up the Negro river, it was too good an opportunity to miss. In May 2012, my wife and I, accompanied by my daughter Lara gazed over the great expanse of water which bordered the greenery near the Tropical Hotel of Manaus. Anchored at the water’s edge was a bobbing gaiola—a typical two-story wooden boat used to carry passengers throughout the Brazilian Amazon.

The three of us would be the first Brazilian passengers ever to set foot on the Tucano, an Ecotourism-dedicated boat catering for International tourists who wish to see the unique ecosystems, wildlife and people of this legendary and endangered realm. ‘Brazilians,’ we are told by the Captain, ‘with enough money to travel on the Tucano prefer to shop in Miami,’ which helps to explain why Brazil’s unique environmental heritage is going down the drain. Yet, here we were, thanks to the generosity of Bill and Patricia Acker, stepping onto a tiny speck of wood that would traverse the swollen river and navigate its raging currents.

The Negro, black in Portuguese, is a main artery of the vast river system that crisscrosses the Amazonian region and flows towards the Atlantic Ocean. Unlike the “true Amazon” or Solimões River, the Negro brings waters not from the relatively young terrains of the Andean slopes and Southern Amazon plains, but from the ancient, long-eroded highlands bordering Brazil and Venezuela. This region, known as the Guyana Shield, is rich in flat-topped tepuis, towering mountains carved out from hundreds of millions of years of erosion that surge vertically from the surrounding plains, and inspired Sir Arthur Conan Doyle to write Lost World.

Relaxing in the Tucano’s best cabin, the one perched high behind the wheelhouse, jungle life played out before our eyes. The boat chugged away from Manaus, clinging to jungle-fringed river banks where the river narrowed, surged through white-capped waves where the main channel widened, and navigated around temporary or permanent islands. Apart from a few elevated terraces, framed at the riverside by the brick-red barrancas or eroded slopes of clay, every land surface was covered by water. The trees and shrubs on the flooded plains evolved to withstand wet feet for months, millions of animal species evolving with it. As the boat snaked through the narrow passages of the Anavilhanas, the largest riverine archipelago in the world and now a National Park, I realized we were looking at the forest canopy, which meant at least ten meters of forest was hidden by the dark waters below. It was difficult to fathom that, during the dry season, guides walked tourists along the sandy tracks on the river bed where we cruised over now.

We toured the creeks and rivers in dugout canoes, where branches usually many meters above ground level now scraped our heads. Each branch harboured a veritable hanging garden where vivid-green mosses, scarlet-red bromeliads and pristine-white orchids could make the best landscape artists envious of their compositions. Especially enamoured by delicate lemon orchards, I appreciated that bromeliads were the true queens, ecologically speaking, of canopy gardens. Their vase-like arrangement holds considerable amounts of water even during drier periods, providing a safe haven for small critters such as tiny crabs and frogs to breed there, and a cup from which arboreal-living animals drink. Their flowers and fruit feed birds and monkeys, and their fluffy seeds adorn many birds’ nests. More elusive to the untrained eye, but inescapable to our guides, were the snakes and spiders, including fist-sized tarantulas, that hunkered down in the florets of the bromeliads.

Not all the flooded forest denizens lived in hiding. At dawn and dusk, we left our cabin to watch large flocks of raucous, colourful birds fly overhead, in their incessant search for food or shelter. After a few days of nature watching, two groups of river-crossing birds became easily distinguishable: toucans and macaws. Toucans often flew parallel to the riverbank amusing us with their awkward short downward glides after what seemed to be rather strenuous wing beating. With extended beaks and sporting a variety of showy colours, from jet-black, light blue and white to bright orange, depending on species, they settled in small groups atop cecropia trees in sections of relatively open canopy.

Farther along the river, an eerie and mysterious noise became more frequent. One late afternoon on the Tucano’s deck, as we admired the changing colours of the sky during the sunset right after a huge thunderstorm, Lara heard a deep poof coming from the starboard side of the boat. Intrigued, a group of us leaned over the rail. Gliding in the water, shearing the surface with their elegant lines, was a family of pink dolphins, one of the most celebrated—and unfortunately beleaguered—symbols of Amazonia.

Pink dolphins share their waters with another small cetacean, the tucuxi, smaller than the robust 2.5 meters and 150 Kg of its rosy-skinned cousin. Neither are afraid of humans, regularly sweeping by our boat in small groups. It appeared the tucuxis kept mostly to the open waterways, while the pink dolphins were not shy of entering flooded plains where their flexible bodies and revered echolocation skills located fish and crabs amongst a maze of roots, tree trunks, and fallen branches.

The dolphins kept us company all the way to the Jauaperi River, our northernmost reach into the hyleaea. There, on a rare shallow sandbank reaching almost to the surface, our hosts deployed foldable chairs and a beer cooler. The dip in riverine environs provided an insider´s perspective and offered a welcome reprieve from the oppressive heat. A family of pink dolphins circled the sandbank for a long while, their loud poofs and surface antics, including the occasional jump out of the water, extracting expressions of amazement from our multinational group.

It was with a mixture of joy and sadness that I watched the dolphins. I knew what was happening to these graceful animals in the upper Amazonian basin: they were being slaughtered for bait. A giant species of catfish, the piracatinga, attracts hefty prices on the regional market, and is fished using traps baited with rotten meat. Settlers illegally hunt the dolphins and illegally catch the fish, often trading it with Colombian drug cartels and returning to Brazil with cocaine. An estimated 2,000 dolphins are killed every year to serve this indecent, vicious traffic, which the Brazilian authorities have tried, but failed to quench. Combined with the fragmentation of the Amazonian basin by mega-dams built on several rivers threaten the survival of both Amazonian dolphin species in this century. With their species on the verge of oblivion, I try hard to shake these thoughts from my head as other passengers take photographs of the dolphins’ antics, but they refuse to go away. Being an environmental activist is inescapable; once you know the terrible truth about the state of our planet, it´s a 24/7 burden. Spending time on the Amazon River renewed my strength to fight the seemingly unwinnable battles ahead. The genuine concern of the captain and the staff about sustainable fishing practices offered me hope, and the flooded plains and the mass of diversity within served as a reminder of all that’s at stake.

As the Tucano rolled downriver, I reflected on what the Amazonian rivers had taught me—not only at the surface of the Earth, but above and below. Brazilian hydrologists and meteorologists have proven the moisture captured by the Amazonian rainforest and recycled through a cloud belt, travels south all the way to the Brazilian south eastern State of São Paulo, where agriculture and urban dwellers suffer the effects of regular droughts caused by rampant deforestation. Affected citizens sound alarm bells, scientists and environmentalists rally and advise, and yet the politicians continue to ignore.

The other Amazonian basin is not airborne and fast-flowing as jet streams allow; deeply embedded in the rocks below the entire Amazonian region, lies the Hamza system, a 4km deep underground river that flows for some 6,000km towards the Atlantic, just like its surface brothers. Although it flows at a slower pace, 10 to 100 meters/year instead of the Amazon River’s two meters per second, it verifies the Amazon region is an enormous mass of water, above and below our expectations.

On our final leg of the journey, the Tucano takes us to the Meeting of the Waters, the legendary place where the dark Negro and the light brownish Solimões waters meet. Whirlpools crash and collide until the densities finally melt into a single, portentous flow traveling side by side for miles towards the eastern horizon. As the boat chugs towards Manaus, it faces the ugly, alien silhouette of the sprawling urban enclave. A raft of plastic and other garbage floats past.

Will humanity as a whole understand the true value of Nature in time to prevent Amazonia from collapsing? As a collective, can we safeguard waters which nurture the forest, wildlife and people, and accrue benefits from its existence without denying it to future generations? Ultimately, the Amazon’s fate depends on the individual attitudes of all of us. A change is surely needed, but it must come soon, because time, just as the Amazonian waters, flows too fast.